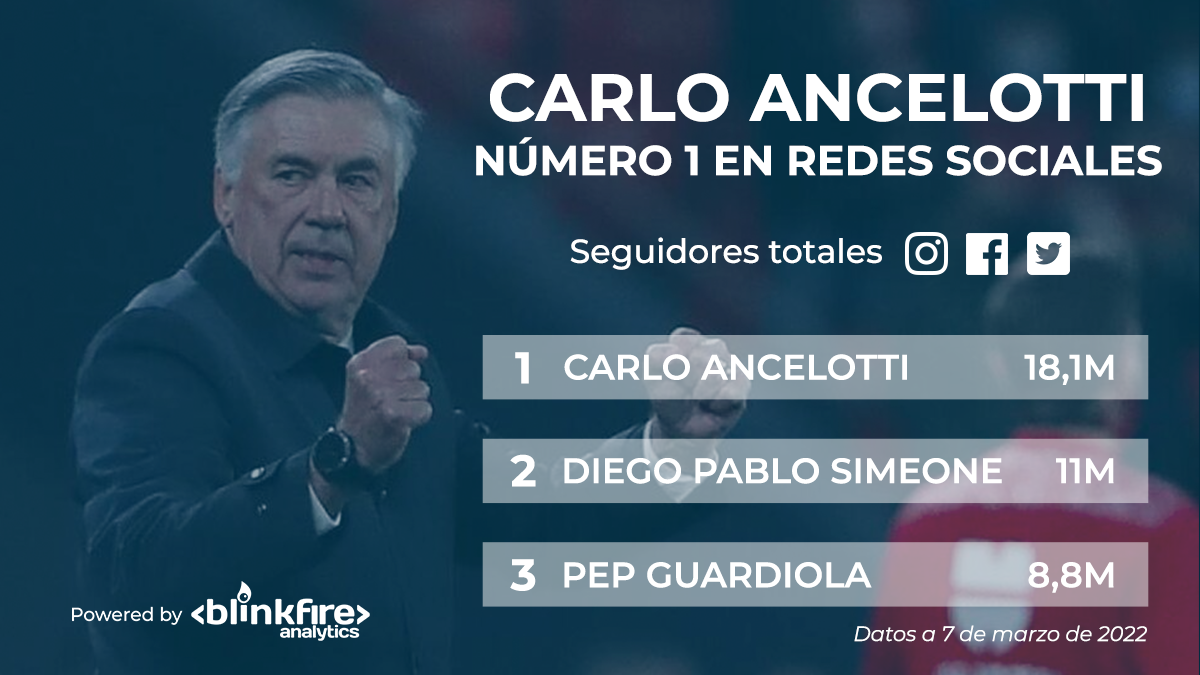 Carlo Ancelotti understood the positive use of social networks since years ago. Always loyal to his principles, he uses his channels to communicate and share the most important moments for him. A report that we’ve made on Blinkfire shows that Ancelotti is the Champions League coach with the most amount of fans (Facebook-Twitter-Instagram). He has more than 18,.1 million followers and the increase has been steady since months ago.

The influence of the return to Real Madrid
June 1, the day of the announcement of his return to Real Madrid, is an important date in this trend. That day Ancelotti experienced a great increase in followers: he added 30,000 new followers. The day after, he achieved even more: 203,000 in just 24 hours: 159K on Instagram alone. In total, between June 1 and 2, the number of new followers reached 233,000.
Carlo already had official channels in his previous stage in Madrid, but his return this summer has made him one of the sports coaches with the most followers in the world. He has more than 3.8 million followers (2.1M on Facebook, 1.4M on Instagram and 238K on Twitter) since returning to the ‘White House’.
The historical publication with the most amount of engagement is the Instagram post announcing his return to Real Madrid, which exceeded 722K interactions. In 2021, his average engagement per post on Instagram was 226K. His most engaged post exceeds that figure by 219%. That same day he also published his Everton farewell post, the second most engaged post with 562K.

The increase after the Super Cup
Real Madrid’s victory in the Super Cup was another communicative moment that Ancelotti was able to share. During this event, the Italian made 14 publications, 5 of them stories. The sum of the 9 posts published on his Instagram, Facebook and Twitter profiles exceeded one million total interactions. On Instagram alone, his posts in Arabia exceeded 716K engagement.
Here you can see all his Super Cup posts: https://www.blinkfire.com/publisher/playlist/6387473549885440